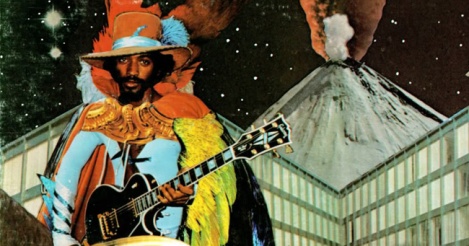 Now most cover songs are unnecessary, and many are worth listening to. But some, like “California Dreamin’” from Eddie Hazel’s Games Dames and Guitar Thangs (1977), brilliantly reimagine the original to present an entirely new experience. Hazel, best known as a member of the Parliament-Funkadelic collective, was easily one of the greatest talents to ever hold a guitar. (The ten-minute jam that is “Maggot Brain” rivals Hendrix’s best work.) Although Games Dames and Guitar Thangs fits nicely into the general P-Funk discography, featuring extensive instrumentals and vocals from other P-Funk members, the album showcases Hazel’s guitar work and production (Hazel co-produced with George Clinton).

On “California Dreamin’,” Eddie Hazel takes the ubiquitous hippie anthem and injects it with soul. Don’t get me wrong, I love The Mamas & The Papas version. It’s extremely pleasant, just like Scott McKenzie’s “San Francisco” (the two songs are quite easy to confuse). And pleasant experiences are great. But no one is ever that excited telling you about something pleasant happening to them. Hazel’s “California Dreamin’” is a visceral experience. You feel the melancholy in Gary Cooper’s voice, the hope and longing in the lyrics, and the furious guitar melting your mind.

Reverberating guitar weaves around the steady piano and subdued (but undeniably funky) bass line while Gary Cooper’s voice somehow drips more hot soul than Bobby Womack’s on his cover. Hazel’s version slows down the original song’s pace, and the vocals feel more contemplative at this more measured tempo. The Mamas & The Papas apparently wrote the original while wintering in New York and dreaming of warmer weather to the West. Hazel, appropriately from Brooklyn, sounds more urgent. The dream of California is more than just a vacation wish. As Cooper croons “dream on” while the music fades out, you know this cover is not just bitching about the cold.

One response to “Random Jam of the Week 005”