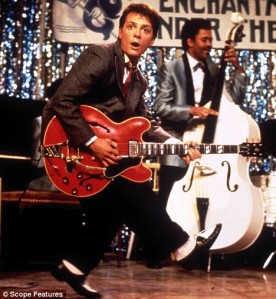 Jack Sparrow commandeering the Interceptor and the officer saying “That’s got to be the best pirate I’ve ever seen.” Marty McFly playing “Johnny B. Goode” at the Enchantment Under the Sea dance. Agent J explaining why “little Tiffany deserved to die” during his Men in Black recruitment. Maximus Decimus Meridius, commander of the Armies of the North, General of the Felix Legions, etc. etc. introducing himself to the Coliseum. Buzz and Woody, “falling with style” into Andy’s car. The “I’ll Make a Man Out of You” training montage.

When these scenes are coming up, there’s no fucking way I’m changing the channel. I’ll sit through a million bad commercials if I have to. Like J and the other recruits for MiB, they’re “the best of the best of the best.” They’ll put a smile on your face no matter what. I might have seen them literally hundreds of times. I might be able to youtube them whenever I please. I might be able to quote and/or sing them word for word. They might be the cheesiest of the cheesiest of the cheesiest. But there’s just something special about these scenes coming up organically on TNT (or TBS or FX or the Disney Channel or whatever). I just can’t look away.

On the opposite end of the spectrum, there’s that scene in Spider-man 3. You know the one I’m talking about. It’s the sequence where Peter Parker becomes “evil.” He stops combing his hair. He gets his rival fired. He stops listening to his professor. He makes the nice homely girl next door bake him cookies on demand. He hits on Elizabeth Banks (what the hell is she doing in this tiny role?). And then — I have to pinch myself and ask every single time I see it “Is this really happening? In a blockbuster trilogy, no less?” — he starts dancing down the street. No, he’s not wearing headphones. No, this isn’t a musical. Yes, he’s snapping. Yes, he’s pointing at the numerous babes who all decided to walk down the same street at the same time. Yes, he does a Michael Jackson spin into a discount store. And yes, he humps the air and twirls his hands together at the same time. For some reason, I just can’t look away from this too.

First of all, you have to ask who decided this was a good idea. In a superhero series that was supposed to be realistic, why would you include this scene that so blatantly breaks into pure fantasy? Peter is legitimately dancing to a song only he can hear. Is this secretly one of the side-effects of the evil black goo? You could argue that besides him, the other characters are acting realistic in that they’re being evasive and giving him odd looks. But if you think about it, a guy dancing awkwardly to no music in the streets of New York would elicit glee and laughter, or perhaps, no reaction at all, certainly not the consistent disgust on the faces of the aforementioned babes. It’s all very confusing.

Sam Raimi got a lot wrong with Spider-man 3. Although the rest of this film isn’t pure fantasy, it does stray dangerously into camp. Take the scene where Harry and Mary-Jane dance the twist. Or the other dance scene where Peter and Gwen upstage Mary-Jane’s singing. Obviously, there’s just way too much dancing. The movie crams in three villains, two of whom inexplicably team up to take down Spider-man. The exact same situation with Mary-Jane being held hostage in anticipation of a final confrontation with Spider-man is played out yet again. Tobey Maguire, Kirsten Dunst, and James Franco over-act the shit out of their roles. But that “evil” sequence stands out as the worst of the lot.

What makes this scene arguably even worse, is that the song playing in the background is absolutely fantastic. James Brown screams his way through “People Get Up and Drive Your Funky Soul.” It’s a funky horn-blasting tour de force with repetitive incomprehensible somehow-empowering lyrics (classic James Brown) thrown in. And yet, in that scene, the music blends into the horribleness of the ensemble. You don’t really notice the song at all. You assume it’s one of those songs they’ll play in laugh-track sitcoms when someone says “funky.”

This isn’t a unique phenomenon. Where perfectly good songs become part of something totally unrelated by being repurposed in advertisements, movies or TV shows. Sometimes the song becomes inextricably associated with its new purpose. This is actually pretty rare, and the effect often fades away. Remember this gem from the early 2000s? There was a time when it was strictly associated with this Mitsubishi Commercial and the Dave Chappelle sketch that mocked it. Now, that commercial is a vague memory and the song still rocks (at least I think so).

But with movies, and especially if memorable scenes are involved, the confounding effect seems to last longer. Johnny B. Goode will forever be associated in my mind with white kids in the 50s and time travel. “Eye of the Tiger” is always going to be a song from Rocky. And “People Get Up and Drive That Funky Soul” will forever evoke images of Tobey Maguire humping the air. Is this a bad thing? Has Spider-man 3 ruined a great song?

When it comes down to it, if the Spider-man 3 “evil” dance sequence is coming up, you definitely won’t find me changing channels. While on the first viewing, the scene is so awkward it’s difficult to watch, eventually it actually becomes endearing in its awfulness. After seeking out the 8-minute Funk opus that accompanies the sequence, I’ve actually come to — gulp — enjoy Peter’s dancing. Put it this way: if that song were actually playing in the street, I would be legitimately tempted to dance like Peter Parker. I’ve come to accept that from time to time, even Spider-man needs to get up and drive his funky soul.