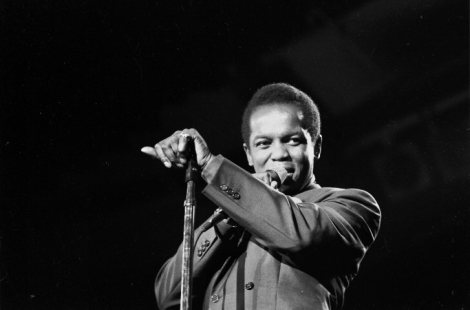 Despite this being one my favorite Lou Rawls tracks, today I’m going to take the liberty of calling it “random” because I rediscovered it a couple weeks ago while listening to iTunes on shuffle. This was one of my jams in high school, and because I’d originally LimeWired it back in the day, I thought for years that it was some obscure version of “I’d Rather Drink Muddy Water” that very few people had heard. But it turns out that this 1966 recording comes from Rawls’s aptly titled live album Lou Rawls: Live! What I like most about it is that it’s way, way more quickly paced than any other versions of the song that I’ve heard. The backing band (Herb Ellis, Tommy Strode, Earl Palmer, and Jimmy Bond) is incredible, zooming through the song as Rawls excitedly screams out the lyrics. And when I say “scream,” I don’t mean the vocals sound bad, because they don’t; with that voice, Lou Rawls could have sing-talked gibberish in all of his songs and we’d still consider him an icon. (I mean, listen to how awesome the man made the alphabet sound.) Anyway, both this song and the live album in general showcase a palpable energy and rapport between Rawls, his band, and the audience listening. It’s the rare, old-school kind of energy you wish you could be wrapt up in at every concert you go to. Unfortunately, no clips of this version of “I’d Rather Drink Muddy Water” exist on YouTube, so bear with me and check out the above preview on Amazon. You might like it so much you’ll be willing to spend the $1.29 on it, which would in some karmic way kinda sorta take me off the hook for having LimeWired it back in high school.

[Update! Found it on MySpace! Who knew?]