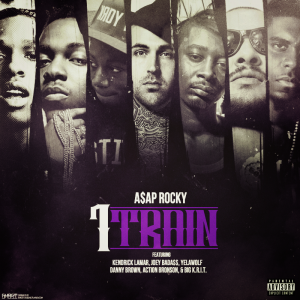 When you’ve got seven MCs rocking the mic this hard, you don’t need a damn hook. “1 Train,” from A$AP Rocky’s long-anticipated debut album, is seven furious verses with an intense dynamic rarely seen since Wu-Tang’s best posse cuts. Hit-Boy of G.O.O.D. Music, best known for producing “Niggas in Paris,” must have spent some time digging in the crates. Sampled from a Syrian pop song, a beat that DJ Premier would be proud of drives forward steadily like a train. Leave the deep-voiced, chopped-n-screwed hooks dropping luxury car names to sound hard to G.O.O.D. Music (and to some of the other tracks on Long Live A$AP). This is unadulterated rap, and it feels like an old-fashioned cypher. It doesn’t matter that you only hear the words “1 Train” once; the MCs each do their own thing, and the only coherent theme they need is ripping more mics than The Fugees.

A$AP Rocky justifies the hype. Whether he’s deep or shallow with his lyrics, the dude can flat-out rap. You know that thing they say about people with great voices? The one about how you’d listen to them reading the phonebook? Well if the Yellow Pages ever goes after the blind market, decides braille is for suckers, and hires A$AP Rocky instead, I’m buying that audiobook for long car rides. A$AP has a phenomenal sense of rhythm and a rare skill for delivering lilting, emphatic one-liners like “anything is better than that 1 Train.” Harlem is back at the top of the game (don’t talk to me about Azealia Banks), and this ain’t bubblegum rap.

It’s a good thing that the East Coast-West Coast feud died out, otherwise Compton’s Kendrick Lamar would be beefing instead of trading verses with A$AP. Kendrick maintains the braggadocio of A$AP’s intro verse but darkens the tone. Like much of good kid, m.A.A.d city, the verse exhibits Kendrick’s paranoid gangsta persona. Appropriately, he sounds almost schizophrenic, as his flow switches up and his voice becomes squeaky and pained.

Barely old enough to buy cigarettes, Joey Bada$$ rhymes the way they used to when he was crawling. It’s a testament to his maturity, 90s hip-hop sensibility, and general quality that DJ Premier himself chose to collaborate on “Unorthodox.” On “1 Train,” Joey reflects on his complex relationship with the unsavory elements of his Brooklyn hood — drugs, violence, incarceration. It takes a special kind of 18-year-old to wrap up a verse with:

“I’m thinkin’ ‘bout signin’ to the Roc,
But my niggas on the block still assigned to the rocks,
And I swear it hurt me soul.
I try to prevail, but when I preach it only hurt their sales.
Like you’re only gonna end up either dead or in jail,
But you my nigga, wish you the best for real.”

Yelawolf continues to show he’s not just some white rapper who has Eminem’s favor. (He’s actually half-Cherokee, although he proudly calls himself an Alabama redneck). Yela flows off-kilter in his sharp Deep South twang, ending his verse with a knockout blow of a punchline. “Ain’t never been no rapper this cold since 2Pac was froze / And thawed out for a spot date at a Coachella show.”

No posse’s complete without its own eccentric. Wu-Tang had Ol’ Dirty Bastard, D12 had Bizarre, and this posse cut has Danny Brown. With an absurdly cartoony voice and singsong flow, he fits his mostly vulgar words into unconventional rhyme patterns. Danny Brown sounds like a crackhead who found some tattered Dr. Seuss books in a dumpster (or maybe he stole them from a child’s stroller; he doesn’t remember). And that’s a good thing because this dude is as unique as they come.

Action Bronson may look like a cuddly bear, but he’s a killer on the mic (which sounds a lot like actual bears, minus the mic part). In person, on the other hand, he blows minds with his culinary skills and endless supply of chronic (which sounds like the Anthony Bourdain of bears). Somewhere in between the hardcore sensibility of Kool G Rap and the goofiness of Ghostface Killah lies Action Bronson. The proudly Albanian-American Queens native spits straight mafioso rap, heavy on the street lingo and on what might be described as international criminal mastermind lingo.

Big K.R.I.T. (the acronym stands for King Remembered In Time), like Yelawolf, is unapologetically country. He flows with a laidback drawl to match his roots and a voice to match the “Big” in his name. Showcasing his lyrical skill, he extends metaphors and allusions across multiple lines. The young Mississippian rhymes with the wisdom of an aged bluesman. “B.B. King saw the king in me, so why can’t you?” he asks, referencing his collaboration with the actual aged bluesman and fellow Mississippian on “Praying Man” from K.R.I.T.’s debut album. Considering B.B. King has otherwise never blessed a hip-hop track with his legendary talents (and not forgetting that King is one of the most important artists in musical history), this is a ridiculously huge deal. Big K.R.I.T. ends “1 Train” with a beast of a verse. He does, however, use LeBron’s name positively, which might have ruined this track for my Cleveland ears if not for Action Bronson “drinking Henny like I’m Kenny Lofton.”

Check out my favorite song of 2013 so far, and make sure to keep tabs on these seven up-and-comers as they run hip-hop.