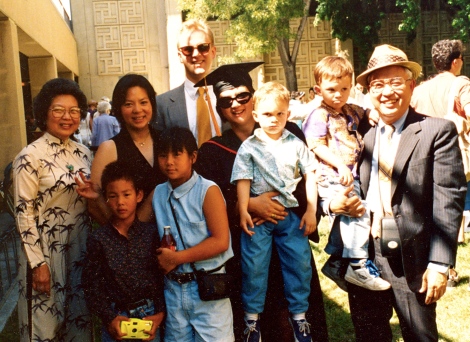 Twenty years ago today, my mom graduated from medical school. (I was in a terrible mood that day; just look at that photo!) Tomorrow is her birthday, and as you’ll read below, Saturday is also my parents’ wedding anniversary. (And by the way, yes, they didn’t officially marry — I’m talking legally, at City Hall in San Francisco — until after Max and I were born, so I guess we’re bastards. But they’d had a traditional Vietnamese wedding before we were born, so whatever.) In any case, to celebrate these important dates in my mom’s life, I figured I’d share this piece I wrote about her in college. Enjoy. And happy birthday, Me (Vietnamese for “Mom”).

Growing up in Saigon in the fifties and sixties convinced my mother that everyone died young. Surrounded by death, she came to believe that her life would be short, and, for reasons she can’t explain, she always thought she would die at 36. On June 13, 1993, she graduated from medical school. On June 14, she turned 37. And on June 15, she officially married my father in celebration. I was three. Since then, she has redirected her anxiety about early death toward her sons.

I was a pleasant surprise to my parents, both of whom believed they could not have children due to their medical histories. Like her life since her 37th birthday, my mother treats parenthood as a bonus. She is grateful and present, but also lighthearted and experimental in a way that alarms people when they see her interact with me. My grandmother tells her daughter that she shouldn’t let my brother Max and me talk back to her or call her demented. “But I am demented!” answers my mother.

For several years now, she has been letting me and encouraging me to stay out late. “Why aren’t you out meeting girls?” she asks. “You hooking up with anyone?” She sends my college roommates and me “Beer Removal” t-shirts and buys us costumes to wear at Halloween raves in Manhattan. Friends tell me my mom is different and cool; until recently, I thought her parenting was normal.

She taught us about sex and death when we were toddlers. Because she was distressed by the idea of us fighting, she implemented conflict resolution during playtime. She’d put a toy down in front of us and ask, “Two boys, one truck — what are we going to do?” then walk away. She never asked about our grades, just about what we learned. When Max’s teacher encouraged him to join a math club, my mom declined, saying it was “social suicide.” At home, she perpetuated my delusional basketball dreams by putting up with my indoor Nerf hoop, which was in the living room and obstructed views of the TV. Whenever the foam basketball landed in her food, she smiled and handed it back to me. She rushed us through museums so quickly that we couldn’t complain about being dragged to them, then rejoiced when one of us called out “Wait!” as we lingered over a painting we liked.

My mother was raised by a celebrated Vietnamese hostess and a Confucian scholar. My grandfather was a distinguished linguist who wrote dictionaries and translated Chinese manuscripts in his spare time. My mother took after him and majored in Classical Chinese Poetry. She spent the next nine years doing a PhD in East Asian Languages and Civilizations. But she grew tired of interpreting dead languages and decided she wanted to do something more practical. She switched to medical school.

My mother is now a psychiatrist. She has her own private practice and takes Mondays off because as a perpetual student she dreaded Sunday nights. She prides herself on being able to go to work in Merrell slip-ons and sweatpants. We tell her she’s an overweight slob, to which she replies, “I don’t care what I look like. And plus, I used to look good. When I was 12, this Vietnamese guy tried to ask me out because I looked like I was in college. He asked what I was majoring in. I said, ‘arithmetic.’” She loves her job because she loves stories. She gets to sit and talk to people for a living. She treats patients of all ages and comes home with both bizarre stories (no names) and a sense of relief. “I’m so glad you’re normal,” she says to us.

Her worst fear is not only that one of us might die, but that one of us might die a dumb death — an avoidable one. She once saw an IMAX movie about a man who died while climbing Mount Everest, leaving behind his wife and unborn child. “Everyone was saying how tragic it was, but I just thought he was an idiot for going on the trip.” She continues about a boy who died while camping a few years ago. He was eating peanut butter with a metal spoon when lightning struck him. “That’s a dumb death,” she explains. What?! That wasn’t his fault! “Look, I would never be holding that spoon,” she laughs. “Seriously, I want you to experience new things and have fun, but don’t be stupid.” My mother doesn’t say “goodbye” to me. Whenever I’m about to leave the house or hang up the phone, she says, “Don’t die.”